when I can’t come up with anything to write about so I’ll just leave you with this lovely bird, hoping you all are enjoying September as much as I do! 🙂 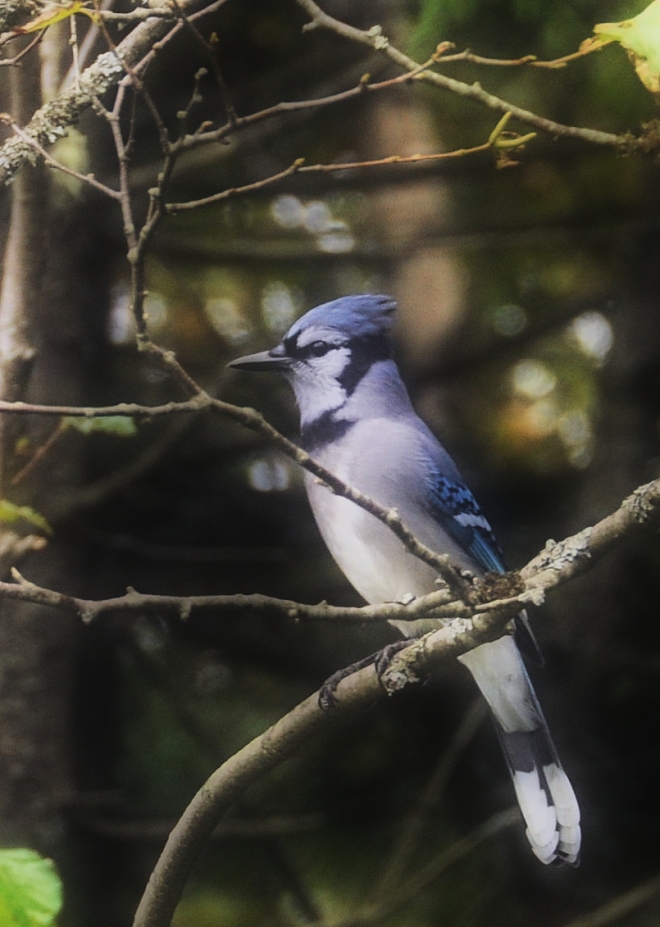 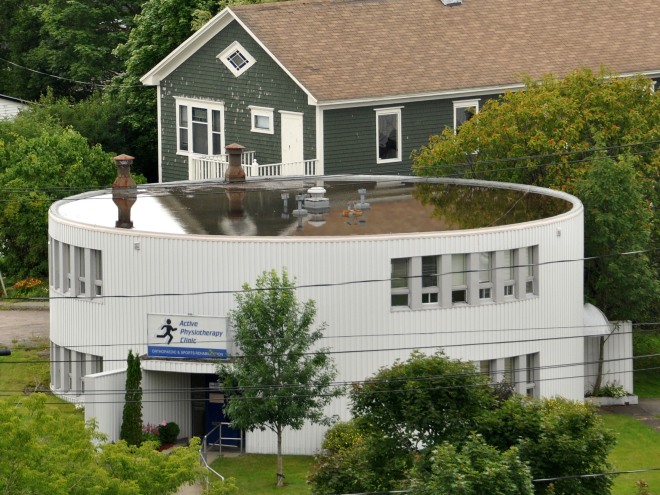 When I looked out over the neighbourhood this morning, there was something that looked different. At first, I couldn’t pinpoint it, and then I thought I was «seeing things», until I realised that the roof of this rounded building was full of water. The other building and the tree is reflecting on the surface! Obviously it rained a great deal overnight, but I’ve never seen that before on that building. I think they might have a problem on their hands. It was still there this evening.

Later, in Rockwood Park, I put out a few peanuts, and the blue jays appeared right away. Several of them … usually they are two, at the most.

I noticed one, at first, that I thought looked different from the other blue jays … then I saw there were several, strange-looking, jays. When I came home and brought up the pictures on the computer screen, I saw they they were bald?! Or at least, balding! What a weird sighting. I have read somewhere about this phenomenon but I can’t remember where or by whom it was written. Either way, it was not a pretty sight!

Apart from the balding, they looked spry enough, and nothing wrong with their appetite for peanuts.

UPDATE: After I posted this, I found this: http://www.birds.cornell.edu/pfw/AboutBirdsandFeeding/BaldBirds.htm apparently a known phenomenon.

Each day, I get those topic suggestions from the Daily Post-team. I read them, but rarely go for them now. In the beginning, I used them every now and then. Yesterday’s topic made me think a little, though and I went and read the comments there.

The question was «If you could spend a day doing anything you wanted, what would you do?» The answers were very varied … some wanted to sleep, others watch series on TV, hiking, doing photography … you name it!

I started to think about this and come to the realization that I can do that most every day … what I want, that is. If I wanted to sleep all day, I could do that … or watch TV … or spend the whole day out taking pictures. How many people find themselves in such lucky circumstances?! Once I even had a job where I thought it felt like a lot of fun to go to work in the morning.

Guess I’m just a very fortunate person and yesterday I was lucky enough to get a few shots of [one of] my favourite birds too! I could hear his characteristic sound, so I put a few peanuts out, and waited patiently. I was rewarded 🙂

There was a couple of a certain age, in a van there. They had a huge bag of bread — double the size of a regular grocery bag — and the man had a whistle of some sort. They made the most incredible sounds I’ve ever heard … I don’t know what they expected to see or attract, but only pigeons showed up.

My guy here, is really fast when he picks up the peanuts, so it’s all a matter of staying focused. Of maybe ten shots, two or three came out sharp.

I never get tired of trying though … because he’s so beautiful!

Yesterday, was nothing out of the ordinary. It was hot but a little hazy, we went to a beach, came home again, watched TV.

I think it was around 11 o’clock, the fire alarm out in the corridor went off! Last time that happened was about two years ago and that time was the first time I heard that alarm. Then … that time … I was sitting in the room where we have the a/c, had the door closed, when I heard some faint kind of ‘ringing’. After a while I stood up to go and find out where the sound came from. That time it was something in the laundry room … a dryer that was over-heated, I think.

This time, I knew right away what the sound was. I get immensely scared but kept my cool. We went out in the corridor, checked the stair wells but couldn’t smell any smoke. Back inside the apartment, I dragged out the transport cage for McDuff and put him in there … told Gerry to bring him, money, car keys et cetera. Grabbed my purse where I have all important documents, and went down.

Met the super downstairs and he said it was most likely a false alarm. We stood outside … a few people … when our buys from fire-house No. 5 arrived. One truck from downtown came too, so there were three of them at one point. This is a really big apartment building, and this could have been a huge distaster.

What was striking now, about all this, was how FEW we were there! There are 160 units in this building and we weren’t more than ten, twelve people outside?! Another thing is … only here on our floor there are at least two or three people who would need assistance. I don’t know if the older people ever woke up from the alarm — I think it’s not very loud.

It was nothing, and the firefighters left after only a few minutes, but it was a reminder! How often haven’t I thought about this during those nights when I don’t fall asleep right away — about what I would grab if there was a fire. This time I would have come away with my cat and my purse. That’s good for a start, but in this case I would have had time to put both my laptop and camera in the backpack. There are other things too … all the DVD:s with pictures, for example, little souvenirs… Somehow all this should be crystal clear — perhaps a ready-made, big bag just waiting… What was more intriguing was all the people who didn’t even get out, many were standing on their balconies, asking what was going on!

Outside the elevators they have put up signs about what to do, where to go … where the fire escapes are, and the extinguishers … there’s one right out side our door … so I think it’s pretty well organized that way. It’s the people who need to think more about it!

This blue jay I put in here merely as a ‘decoration’. I was so happy to see him the day before yesterday … it’s been ages. I had peanuts, but he wouldn’t come down because there were too many kids there, running around, yelling.

Often it seems to me that there are more colourful birds here, in North America, than in Sweden … (was going to write Europe, but I don’t know anything about the rest of Europe).

Before I go on, I’d like to point out that I’m not a «birder» per se … my interest in birds, mainly waterfowl, started late in life, and I’m not out early mornings with binoculars … I just love them and to take pictures of them when I can.

The Blue Jay has been elusive lately, but yesterday I saw this guy, sitting around in Rockwood Park.

When I had first arrived in Quebec, the blue jay was my first bird acquaintance. There was so much snow, so his lovely blue colour really stood out, and I thought it was some exotic bird that had escaped from a cage! He has remained a favourite of mine. I never tire of looking at his intricate design.

When we’d lived here in Saint John for some time … I think we were down by the Reversing Falls, when I saw something small and bright yellow flying by. It happened too fast — I couldn’t see what it really was.

Later on, when I got the camera and started spending more and more time in the park, I’ve seen several yellow birds.

This Yellow Warbler, was just waking up one early morning last Summer in Rockwood Park. I started going there real early last summer — not only for birds, but also for the serenity and the colours of the morning … the, almost indigo, light the minute before sunrise. It’s priceless.

I have yet to see a Cardinal bird in real life. I’ve seen from a distance … a bright red spot in some bushes, but I can’t say that I’ve seen the real bird yet. Countless, gorgeous pictures, though …

Can’t think of many birds back home with these bright colours. One that comes to mind is  the Eurasian Bullfinch (Domherre).

He’s a popular  guest by the bird feeders, but you mainly see him in the Winter.

My mum used to put out birdseed all the time during the Winter months, hoping for the ‘domherre’ to show up, and he did, most of the time.

This picture of these bullfinches, is from Wikimedia [what a wonderful website to have around when you need a picture]. I don’t have any bird photos of my own from Sweden.

The Blue Jay has a distant relative in Sweden — the Eurasian Jay — but it’s beige and one thing that shows they’re related is a small blue patch on its wing.

I’ll sum this up with the American Goldfinch before it gets to be too long. They seem to be quite common, and they often hang around down on Tin Can Beach. Last Summer was extremely hot, and this little guy was taking a bath! Good for him… 🙂

The first time I saw a blue jay ever, was in January 2004 in Quebec. It was thirty degrees below freezing, he was embedded in snow, and I could hardly believe my eyes. I’d never seen anything so beautiful. Didn’t know about blue jays before that.

That image is forever etched in my memory, and now since I got the camera I have like a little ‘goal’ or project … to capture a blue jay in snow. Yesterday, I was getting close. I walked a little bit along a trail in Rockwood Park, because there were so many people around the feeders, talking with the squirrels and chickadees. Wanted to capture the snow clad bows and branches … and there he was! I want one, though, where you see more of the tail and the back of him. Patience!

It’s not only a matter of my own patience … it’s Gerry’s too! He’s amazing! We go to the park almost every day, and he has to wait while I pursue all my little ideas.

We got a lot of snow overnight last night … in the afternoon the sun came out and it turned out to be an absolutely glorious winter’s day — just like this day.

We’ve watched a great deal of junior hockey from Buffalo, NY. Last night Sweden lost in a shoot-out against Russia, so on Wednesday Canada will play vs. Russia for the gold medal. Luckily it’s not tonight because tonight a new season of my favorite show starts! Flashpoint! It’s a Canadian production that has also won a great deal of acclaim in the United States. It all takes place in Toronto.

I’m perhaps not a big «TV-person», but this show is something that I really look forward to … just like I used to do with Sopranos.